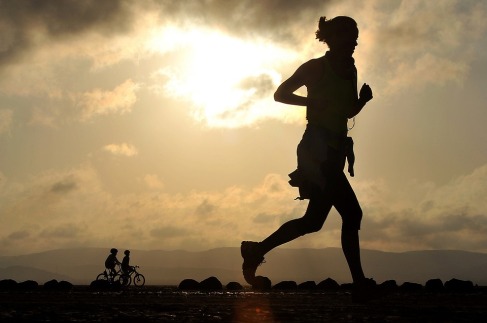 I have been toying with the idea of becoming a runner in 2018. It’s a lofty goal because for the last 50 years I have absolutely abhorred the idea of running. The first memory I have of running dates back to about fifth-grade gym class when our teacher asked what everyone’s dream destination was. Do you know what’s coming? Well, we didn’t. Everyone yelled Florida, home of sunshine and Mickey Mouse. What came out of his mouth next was horrifying and chilling: OK, you’re going to run there. What?!

His brilliant idea was to find out how many miles to your dream destination (nearly 1400) and then over the course of the next several weeks (years!) we would run there mile by mile in a loop that encircled the playground and sports field next to our school. It’s amazing how many of us decided our dream destination was Hague, NY a nine-mile distance that seemed more reasonable, if not as enticing.

I have never been able to psyche myself up for a run. My mind seizes up, my breathing becomes shallow and my legs less sturdy even before I’ve taken a step. I managed to huff and puff my way around the field a few times that first day but soon after the “gym incident” I came into class with a note from my doctor that due to my diminished lung function, I should be excused from running.

I didn’t put much thought into running after that. It was just something I couldn’t do. Like a triple axel or vaulting over the horse in gymnastics. At a young age, I realized the limitations of my body. Years passed in this manner and then I got to high school. My mother had a rule that we always had to participate in a sport and when spring came, I was guided to Track and Field because I was a really horrible softball player. I think this was where my relationship with my mother went downhill for the next few years. It was a battle of wills and she won.

My fourteen-year-old mind had been brainwashed by that point that running was impossible. Even the coach (who was also my gymnastics coach) felt sorry for me and allowed me to ride along with her while everyone else was running a three-mile loop around town. I’ll never forget the time my mother caught me in the cab of coach’s truck following a pack of runners and I was unable to slink down in time so she wouldn’t see me. Coach stuck up for me though and made me her assistant of sorts. By senior year I wised up and joined the golf team. If only I’d done that sooner.

Fast forward to my mid-twenties. My primary doctor referred me to an allergist who she thought could help me with my sinus issues and asked if I had any preferences. I said I saw a Swedish doctor, Dr. Meuwissen, in my teens and since he was still practicing in the area she referred me to him. He was thrilled to see me again and asked the girl at the desk to find my files from the early 80’s which he said were in a storage closet in an off-site place. She rolled her eyes at his crazy request and I’m pretty sure she never found them. He was excited to catch up with me and hear how I was doing. He couldn’t get over it, really. We spent a lot of time together and he asked me questions other doctors hadn’t thought of. What time of year did I feel my best? What activities did I do? It was here we put two and two together that winter was a good season for me and skiing the perfect activity.

Skiing was months away at this point so he pulled out a prescription pad and wrote in his doctorly scrawl the word running. I balked. He was sure this would be the perfect activity for my lungs. I felt the easy camaraderie and pleasant exchange we were having drift into another realm altogether. He had a method, you see, and he was going to make me realize running was within my capabilities. Here’s what he wrote down on his pad and this would be my prescription for getting well.

The stark reality of it was that I couldn’t do it. My mind was a powerful thing and it kept blocking me from doing this for more than 5 minutes at a time. I felt defeated and decided I’d better not go back to see Dr. Meuwissen for fear of disappointing him. Many more years have passed, about twenty-five. But I’m ready to give it another go for one reason. I have barriers for sure but I can’t help having an overarching feeling that I can do more than I think I can.

If you have any tips or encouraging stories to share about how you came to love running, I’m all ears.