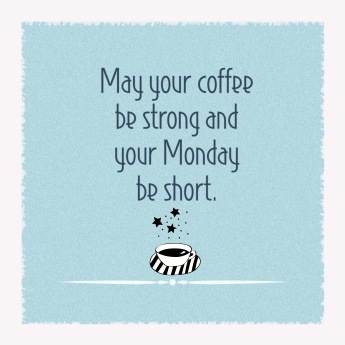 I want to go back to bed. Instead, I’m at work in our redesigned department, a line of desks against a wall, all exactly the same. It looks so robotic, so office-like. Of course, I do work in an office. I’m waiting for our IT folks to bring the phones and computers while I’m pretending this new floor plan isn’t happening.

My old desk was against a row of windows where I had a front-row view of a major road (there were often fender benders directly in front of us – none causing grave damage as far as I could tell). Now I’m looking at nothing but a vibrant blue partition. I need to look on the positive side of all this so let’s conjure up some good thoughts.

Guess what? My running plan has been going very well! I haven’t been able to get on a consistent schedule yet but I’m getting to the gym about three times a week. Last Friday I experienced such euphoria after my workout (runner’s high?) that it’s good incentive to keep going. I look forward to getting to the gym and my new workout which consists of alternating walking and running for thirty minutes is a much better workout than I had been doing which was 40 minutes of fast walking. I actually sweat now! I am pushing myself too which feels good.

Last night Jim, Liam and I went to see Griffin House at Caffe Lena (a fabulous place for an intimate show and the oldest continuously running folk music venue in America). He is a wonderful musician and great storyteller. We have seen him several times and while some of the stories were familiar, he always has new ones and it feels like you’re sitting around with a friend over coffee. At Caffe Lena, there is always a good chance of sitting with strangers (it is coffeehouse style) and we sat with some new fans of Griffin who had never seen him live before. You know how you introduce someone to someone you love and want them to love them too? That’s how I wanted our new friends to feel. And they did love him. A new thing I learned last night is that he knew Tom Petty and his Flying Upside Down album was recorded with some of the Heartbreakers. If you like singer-songwriters, give him a try!

I’m in a much better mood now. It pays to remember the good things in life instead of ruminating on the bad. Hope your Monday is off to a good start and if not, conjure up some new thoughts.