I’m so happy to see the sun today and feel Spring in the air. It was a bit of a surprise last week when we woke to a thin ground cover of snow (actually not so unusual for the Northeastern town we live in). But eek, my husband and I were about to head to New York City for the weekend to see a couple of shows and I wondered if I had to rethink my clothing choices which heavily favored lighter fabrics (I’m one step from putting away the winter coats). I decided to stick with my spring coat and added a scarf and sweater for layering which worked out just fine. We had a fantastic time, but as is the case with these kind of trips, it went by all too fast.

Even though I love winter too, I always look forward to the start of Spring when the clock moves forward and the increased daylight seems to signify a fresh start and new beginning. Clothes have always figured into my seasonal refresh and just because I’m not working doesn’t mean I have to forgo looking nice on a day to day basis. In anticipation, I cleaned out my closet last week and moved most of my heavier clothes to the guest closet which is where I store my off season things. My husband and I share the world’s tiniest closet (pictured below). I guess you could say I use the capsule wardrobe system mostly out of necessity. Believe me, I have tried to think about ways to improve the closet situation in our bedroom but short of putting an addition on the back of the house, I see no way around it. 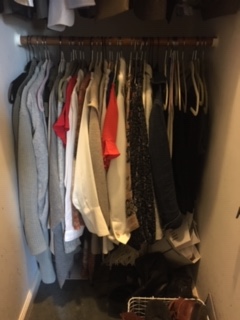 In my last post, I shared the possibility of starting a YouTube channel about style and I continue to scour the site for similar vlogs to get some ideas. There are many, many people sharing their experiences with the various subscription styling boxing services (Stitch Fix, Trunk Club, etc.) and I thought maybe that might be a good entry point to starting the vlog. I played around with some intros this morning but I’m not happy with anything I did. It feels so unnatural to me! I wish I was more extroverted and energetic on camera. I came away without much content but a lot of bloopers :).

Last year I had paused my Stitch Fix subscription as I wasn’t happy with most of the items my stylist was sending, but after watching some of the videos, I was inspired to give it another try. I hadn’t given her any feedback about what I didn’t like about what she was sending and felt I didn’t give her a good chance by leaving out that pertinent information. My next Stitch should come next week and I’ll make a stab at a video about it.

Speaking of subscription boxes, a few weeks ago I decided to try a meal version on a bit of a whim. I had been finding it hard to get us to sit down together for a meal and would buy ingredients for various dishes only to have things come up during the week and the items would either go off or end up in the freezer. Home Chef was getting rave reviews and I found an offer of $20 off each of your first four shipments so I thought, why not? My twelve year old became vegetarian last August so I was mainly fixing dinner for my husband and myself anyway. Of course I also feed my son but he’s starving when he gets home from school and has dinner long before we do.

The first shipment nearly freaked me out though because I hadn’t cleaned out my fridge and I unboxed the meals and didn’t know how I’d fit them in. Turns out I had a bunch of leftovers that had gone off so once I removed those, I was in pretty decent shape. Our first meals were a beef stir fry, a chipotle ranch chicken salad and a spicy tuna sub (Lent!) and they were extremely satisfying. My favorite part was there was just enough food for the two of us so no more leftovers to be tossed at a later date!

Last week’s box arrived and all the meals were a bit of a surprise. You have several meals to choose from each week (I am on a 3 meal a week plan) and I had apparently chosen the meals for the following week while leaving the current weeks meals at their default which were steak, chicken breast with some kind of sauce that didn’t sound very exciting and a turkey chili, none of which appealed to me. These were all excellent despite my initial thoughts. They feel fancy so I’ve been plating them on the rarely used china we got for our wedding which makes it feel even more special.

Other than not having leftovers to deal with, I also like that they send you nearly every ingredient in the correct portion the recipe calls for and so far I’ve only needed to supply olive oil, salt and pepper on my end. I haven’t tried any other meal subscriptions so I don’t have anything to compare it to but I am extremely happy with Home Chef and will likely continue once the promotional $20 off per box period ends. It also allows us to try new things without having to buy all the various ingredients needed and so far most meals take less than 30 minutes to make. If you want to give it a try, click here to get the special promotion.

So with food and fashion on the brain, here’s to a new season!