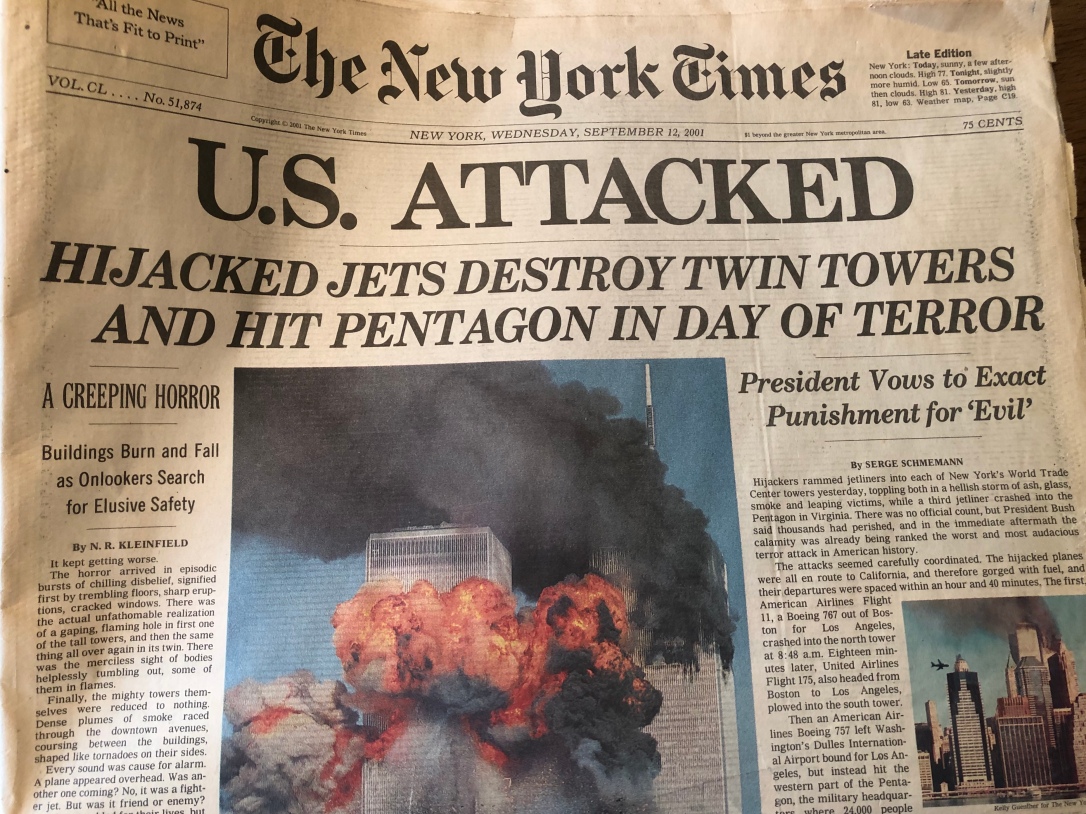 The days that become big and important in our mind, when solemn and life-changing things happen, don’t they all start out as ordinary days? Weren’t you rushing out the door, hoping not to be late to work again, fighting with all the other commuters for your place on the road? The radio on in the background catching you up on the news of yesterday but you’re thinking of other things. I forgot my lunch. What’s for dinner? Will I see my newish boyfriend tonight?

The sky is clear, blue. That is something to notice because summer is quickly becoming a memory, fall is nipping at her heels. Suddenly the radio tells you something unbelievable. A plane hit a building in New York City. That can’t be right. Wow, how could that have happened? So much denial that the day was going to become something that you had never imagined. That there was evil in this world capable of taking out so many innocent lives with an object you’d never thought of as a weapon. But you didn’t know that yet because it was a fluke. A pilot error.

I remember where I parked that day because I pulled in just as the radio host announced a second plane had hit the World Trade Center. In front of me sat the newspaper building. A fortress, designed in the days after Patty Hearst was kidnapped, it was meant to keep the bad guys out and the good guys in. It was where I did my growing up in the working world, it was my home away from home and it’s walls contained work family and friends.

The newsroom was nearly deserted when I arrived. No one expected today was going to be anything other than the typical coverage of primary elections in our city that sits 3 hours north of New York City. That meant a late start and a late finish for the day. My boss, the editor, wasn’t in yet. It was my job to arrive first, to set up his office so he could see what was on the front page of all the other newspapers which I would arrange on bulletin board strips around his office. Our competitors plus the New York Times, Daily News and Post. They arrived at my desk in a bundle each day and as I looked at them that morning, I didn’t know what I was doing.

But memory and habit kicked in and I did as I’ve always done. My boss arrived soon after, turning on his television. All the televisions in the vast empty newsroom were dark except by the city desk, the editor standing just underneath staring uncomprehendingly. We were being attacked. I am not a news gatherer. I am there in a supporting role and I was lost about how to offer support. My boss immediately began huddling with others who had swiftly arrived as though suiting up for battle. We had a reporter and photographer heading into the city, working on a feature story for a future Sunday paper. Should we pull them back or let them go in, a breaking news story to cover?

To be honest, I don’t remember how much of that day passed except that I was glued to my computer and because it was a newsroom, we had access to all the stories before they go to print. I devoured them, hungry to make sense of what was happening. Two planes. Three planes. Four. When would it end? How were we going to survive this?

How could I help? I ordered food. That’s how I helped. It wasn’t election coverage that was going to keep us late into the night, it was this hellish, unending day. It was images of people jumping from burning buildings and the smoky, ashy streets of lower Manhattan being broadcast into our midst.

At six or seven p.m. when it seemed there was absolutely nothing I could contribute to the operations of the office, I shuffled to my car in a daze, about to make a commute I’d done hundreds of times before. But this time the world had changed and it was no ordinary day.