Considering it is 25 degrees here in upstate New York, that is an amazing feat! It dawned on me as I was doing my morning writing, reflecting on a writing retreat I took part in yesterday (more on that to come), that I hadn’t completed the assignment she had left us with yesterday afternoon in the minutes just before this country became chaotic and unimaginable. I could not believe the things that were happening on the screen I had tuned into as I was seeking to get an update on the fate of the Senate races in Georgia. Instead, what started out as a normal rite of passage, the certification of the votes for the next President, soon turned into anarchy and violence. So glued was I to the unfolding news that it took a text from my son reminding me he was done with school to rattle me back into my world.

The rest of the day went along, I moved away from the screen, into a book, into conversation with my son, back to my email where a teacher had responded to a note I had sent the day before. The school year hasn’t been without struggles and this teacher and my son have not had an easy relationship this year. She wants him to act a certain way (understandable), but he is bored and unchallenged and there is more stress than ever due to Covid so other options aren’t readily available. Feeling her response was terse, I tamped down the urge to respond in kind, something regretful, and so I put it away. The first response is not always the best, I have found. I decided to sleep on it.

When WordPress did away with their daily writing prompts in May of 2018, I was very sad as were many of my fellow bloggers. I started writing in 2016 as a way to process my days of early recovery from alcoholism and without it, I might still be drinking today. Pouring out my experience here, helped get me through a very hard time. But after a few months when I was starting to feel better and wanted to write about other things, the daily prompt was great inspiration. It helped me think about things I hadn’t thought of in years whether it was happy, sad, weird or just a string of a memory. It enabled me to discover other writers too, as the the post for the prompt catalogued all those who participated.

END_OF_DOCUMENT_TOKEN_TO_BE_REPLACED

How does this sound? You’ve cleaned up the morning dishes, cleaned up your writing room (it is the first room in the house as you come in the door and gets loaded up with coats, mittens, boots, nerf guns, you name it), the dishwasher is humming away, the dryer is spinning in the next room. You’ve got a large mug of hot tea by your side, journal and pen in hand, ready to write down your writing goals for 2018. The house is quiet, surrounded in fresh white snow and the family is at work and school and the dog is planted at your feet. Cozy, huh. END_OF_DOCUMENT_TOKEN_TO_BE_REPLACED 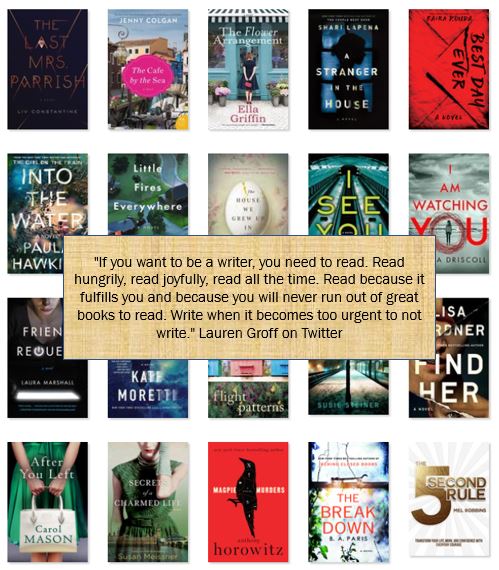 This tweet from Lauren Groff (who I’ve never read but may have to change that next year) resonated with me and where I am at this stage. I haven’t been writing and that’s ok. I used to feel guilty or embarrassed or something that I professed to want to be a writer and yet not write and then I made myself write every day whether it be in my journal, on a random scrap of paper or in the drafts section of WordPress, never to see the light of day. I have over 20 drafts in my WordPress folder if anyone is counting.

Back in October, I was so excited to have Fridays free to write when I went to a four day work week. Guess what? That time began to fill with other things mainly related to parenting and home life. I finished up my Thursday night writing class a couple weeks ago having missed half of the eight sessions because even when I try, I find it impossible to put myself first for fear I’ll disappoint someone else.