Yesterday I mentioned the absolute badassery of the morning buffet at the yoga retreat, but food in general is a serious endevour for the Greeks, or at least that was my impression from my brief time there. Meals are far from the fast food culture of America where 20 to 60 minutes might go into the preparation of a meal which is then devoured in 10 minutes. Food was a celebration on this trip and meals lasted between two and three hours (except for the breakfast buffet where you could linger as long or short a time as you wanted). And Aegialis went a step beyond by growing much of their fresh produce which was offered at each meal.

Let’s go back to breakfast. So impressed was I by the extent of their offerings that I attempted to film the entire spread sidestepping hungry guests who were just finished with their morning yoga practice. Women and men, clad in their yoga wear, wove through the lavish displays picking and choosing the nourishment to start their day. Coffees, lattes, espressos, cappuccinos, organic teas, smoothies, fresh squeezed orange and cherry juice (yum!), flavored waters. Cheeses, olives, breads, herbs, jams, dried fruits, yogurt, meats, crepes, oatmeal, croissants, fresh fruit, greek sweets, apple pie, baklava, spanakopita. You get the idea. Click here to see a visual tour.

Lunch was a casual affair and we took turns offering each other the view which only half of us could see at any given meal. But it was no bother if you didn’t get the view because we were engaged in lively conversation most of the time, sharing snippets of our lives, our joy at being in this beautiful place together, making plans for the day (we did yoga in the morning before breakfast and just before dinner so we had the days free to wander). There is no doubt that lunch could have been dinner as so many of us were unused to such lavish meals in the middle of the day. Hadn’t we just had breakfast? But it dribbled out in courses: breads, small plates, salads, mains, sides and desserts – we were in anticipation for what was coming next because for lunch we had no idea (dinner they provided a menu of items to expect). All that we knew was it would be really good.

It was tempting to go lie down for a mid afternoon nap once lunch was done. Some would go to the pool and others would trek into the village and nearby beach which was about a 15 minute walk. And there were massages, saunas and steam rooms to partake in. There were hikes and other nearby sites to explore but this is about the food right now. So let’s move on to dinner.

Our group was scheduled for dinner at 7:30 each evening but often we’d be leaving the shala close to seven and we’d trickle into dinner based on how much effort you wanted to put into getting ready. I soon learned to take my shower before the last yoga class. Lana and I tried to arrive as close to on time but it would be more like eight before we were all gathered. Our fearless leader, Julie, insisted on a group shot each evening as the sun was setting and I’m so glad we have these memories to retrieve as wanted. 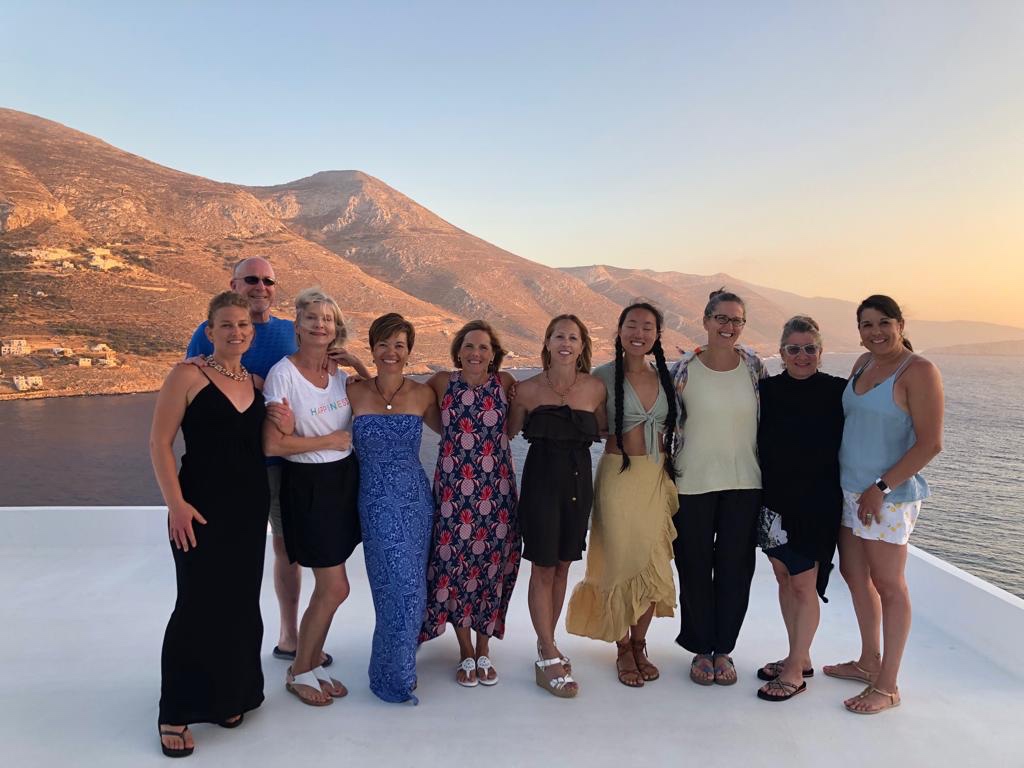 Once we were finally all seated the food started coming out in a steady stream. There was always bread and soup (avocado/pea/mushroom/lentil) to start followed by a variety of salads (their most traditional was Amorgian with feta, cucumbers, tomatoes, onion, olives, olive oil and herbs with some crusty bread to soak up the juices). A light dip would be served such as tzatziki or guacamole or hummus. Calamari or potato croquettes or sautéed vegetables came next followed by a main course of fish, chicken, pork or risotto. 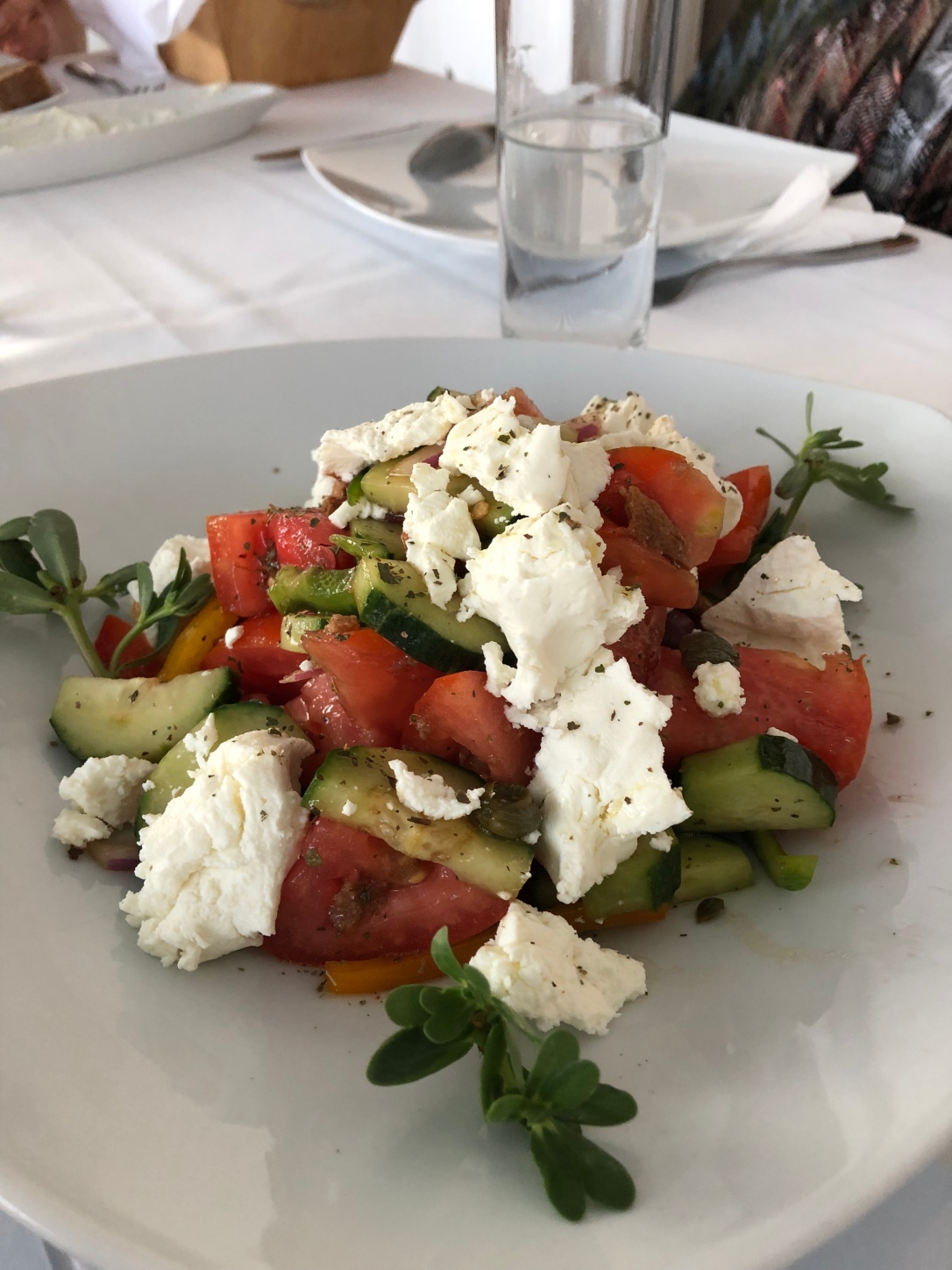 And then there was dessert. Beautiful, amazing, gorgeous desserts. Kormos, cheesecake, galaktoboureko, hazelnut mousse (my favorite) and all meals offered gluten free and/or vegan options. The staff were incredibly attentive and accommodating – sending extra plates of dishes we all loved (like the amazing mushrooms) or changing our meal times so we could have more time to explore. No request was too small. They were a happy and fun group and you could tell they enjoyed their work.

The second to last night was a special treat – the owner played traditional Greek music on his violin while diners partook in a festive night of dancing. We clapped along because the dance floor was small and the locals knew all the moves. So amazing.

And that my friends was the glorious experience of dining each day and evening at the Aegialis Hotel & Spa.

For more about Greece: