You might find it curious that I’m on my fifth day of blogging about a yoga retreat I attended in Greece and I have yet to mention much about the actual retreat. This would be the main event of the trip and I don’t feel equipped yet to tackle it. I’m also in Florida right now and the journal I kept for the week is in New York and it’s crucial to retelling the story. The retreat is the star of the show. 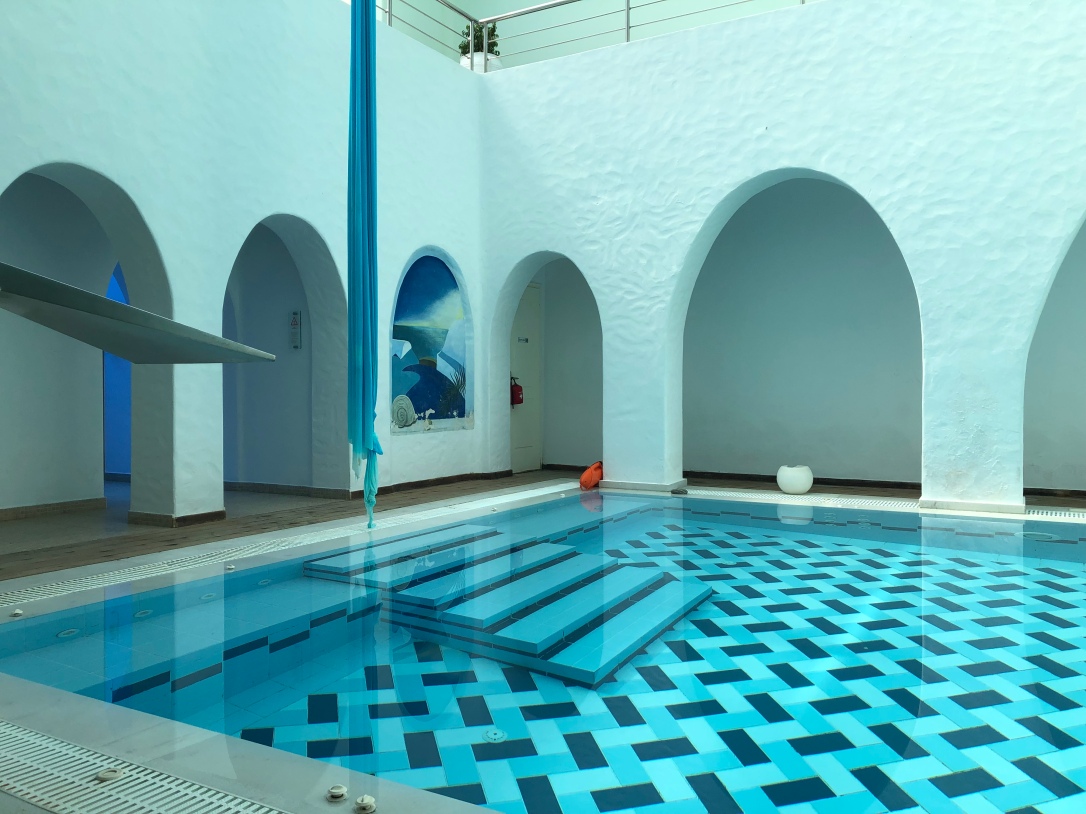 So today lets talk about the extras: what we were up to in our free time. The Spa at Aegialis was pretty darn amazing and Lana and I decided to make a visit on our second day there. I made my massage appointment for the following day and Lana was interested in trying out the silk-like ropes that were hanging over the indoor pool. One of the brochures showed a woman balancing while completing some kind of impossible (to me) acrobatic move and Lana was determined to give it a try. I volunteered to be her cheerleader and videographer. She gave it her best and I think she did pretty awesome but we found it was going to be impossible to immitate the maneuver.

From there Lana went on her way and I decided to check out the steam room or Hammam. I had heard it could help with chest congestion which I was dealing with and I wasn’t breathing comfortably. It worked wonderfully. The next day I returned for my hot stone massage which was incredible and another visit to the Hammam. I was getting to know the staff and they were just as wonderful as the dining room attendants.

The grounds around the resort are laced with trails which lead to various beaches in the Aegialis area of Amorgos. On Monday morning a group of us decided to hike to a small church just beyond the road to the hotel. Once we approached the stairs leading to the church I was having second thoughts but then figured there was no timer on it and I could go as slow as I needed. Sometimes we make mountains out of hills and that was the case here. One crazy thing that happened was my hearing aid went flying over the ledge, but Lana came to the rescue. Everyone needs a Lana! 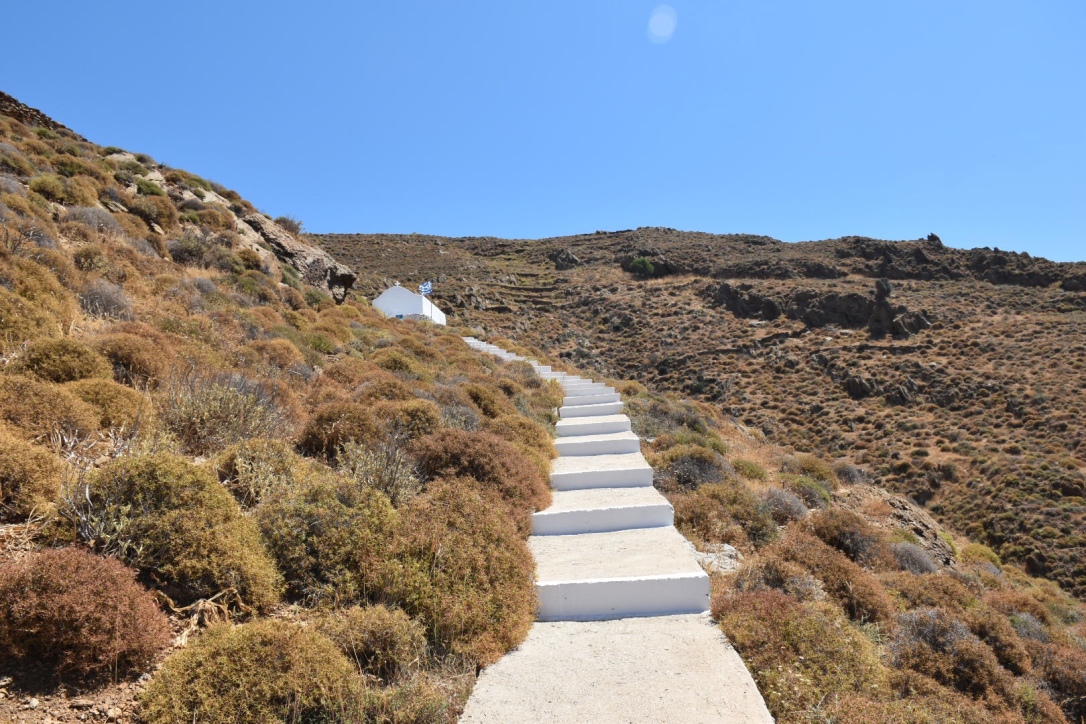 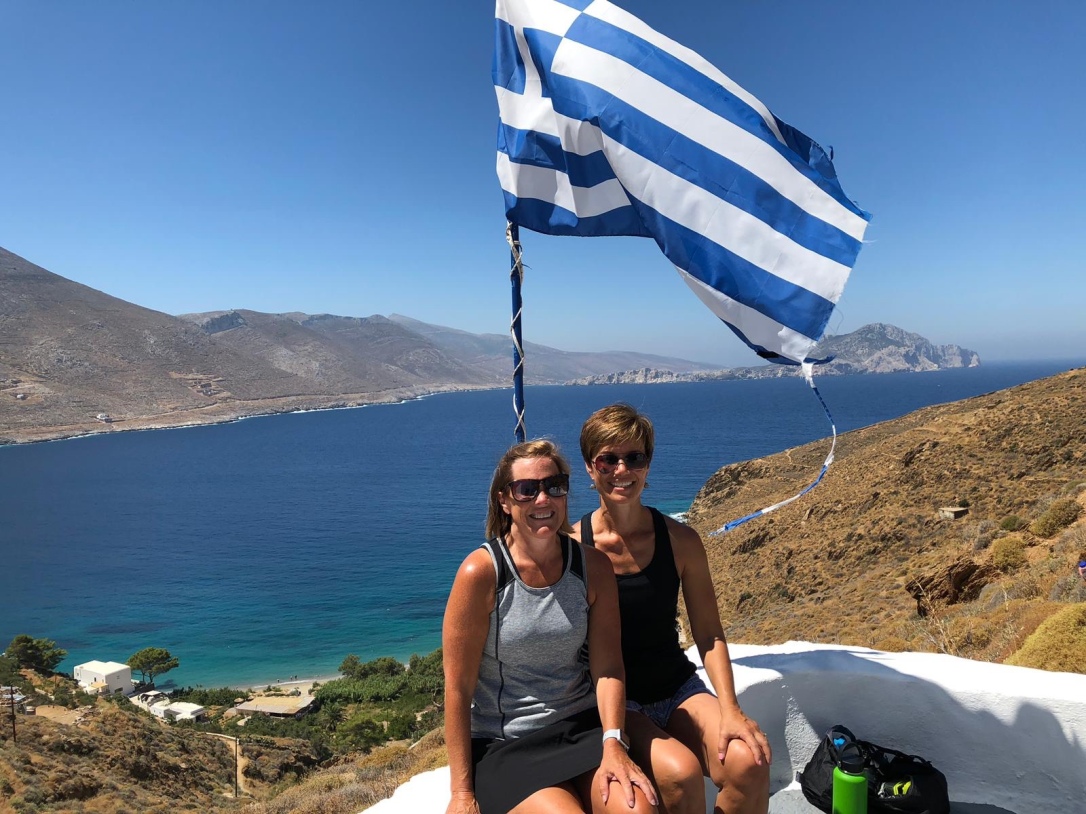 Part two of the hike brought us back to the coastline and another set of stairs going down, down, down. The trail along the coast had breathtaking views but you had to be careful of two things: brambles and spiderwebs. It wasn’t long until we arrived at the beach. The nude beach. The others were in better shape and kept walking while I decided to put my feet into the Aegean for the first time. It wasn’t a beautiful beach like you see in the Carribean but the water more than made up for the lack of beauty of the sand. It’s a cerulean blue and refreshing after a long walk in the sun. I kept my eyes on the horizon and away from the sunbathers! 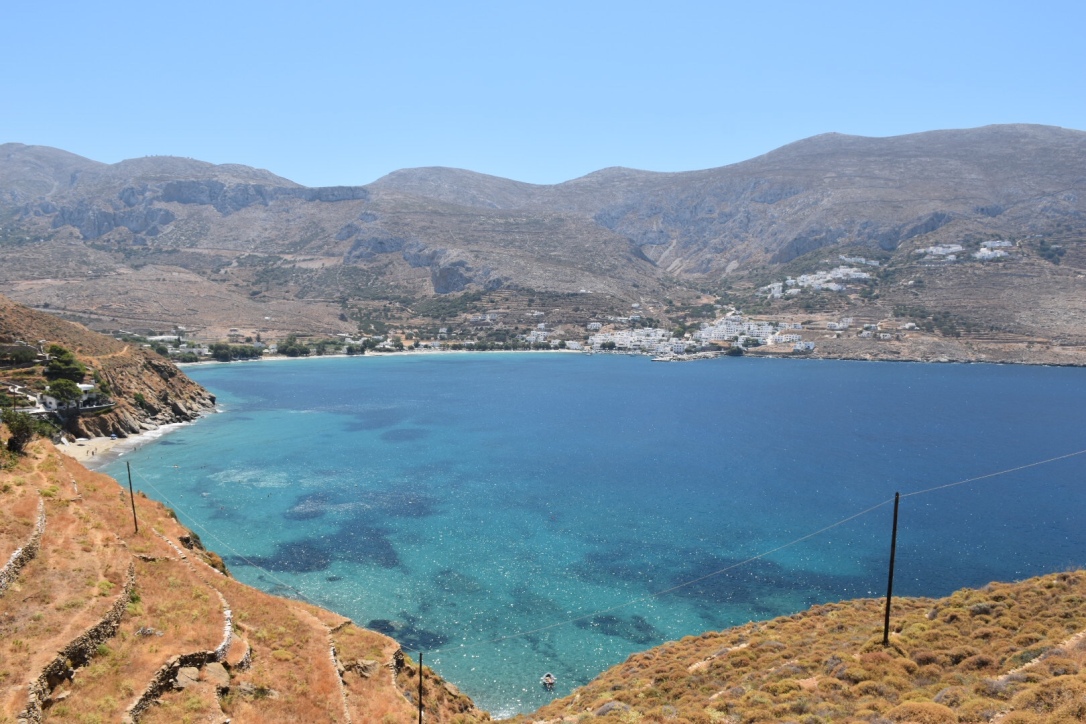 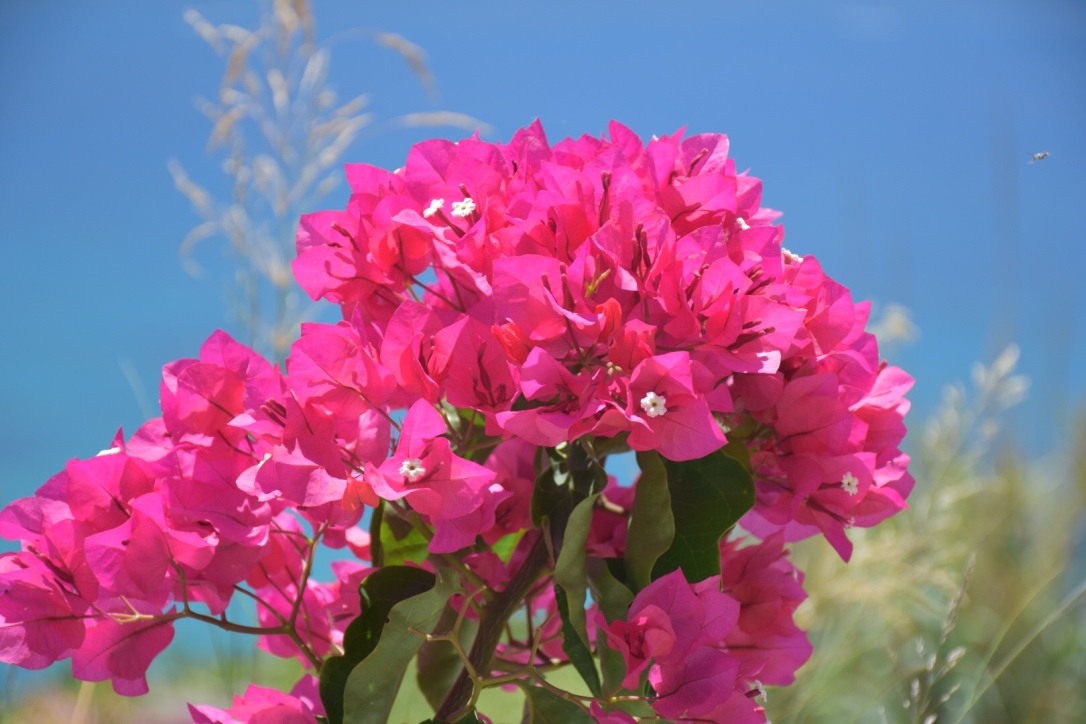 On Tuesday we found an activity nearly everyone wanted to participate in: kayaking and paddle boarding. We piled into the Aegialis van and went to town where we could rent them for about an hour. The water was a bit choppy so I was glad to be in a kayak. I have never paddle boarded before and I didn’t think the Aegean Sea would be the proper place to start my education. The only thing we were cautioned about was to stay away from the port area where larger boats and ferries docked, but that was where the wind was blowing. It was a bit of work to keep it heading the right way but a great way to spend an hour. 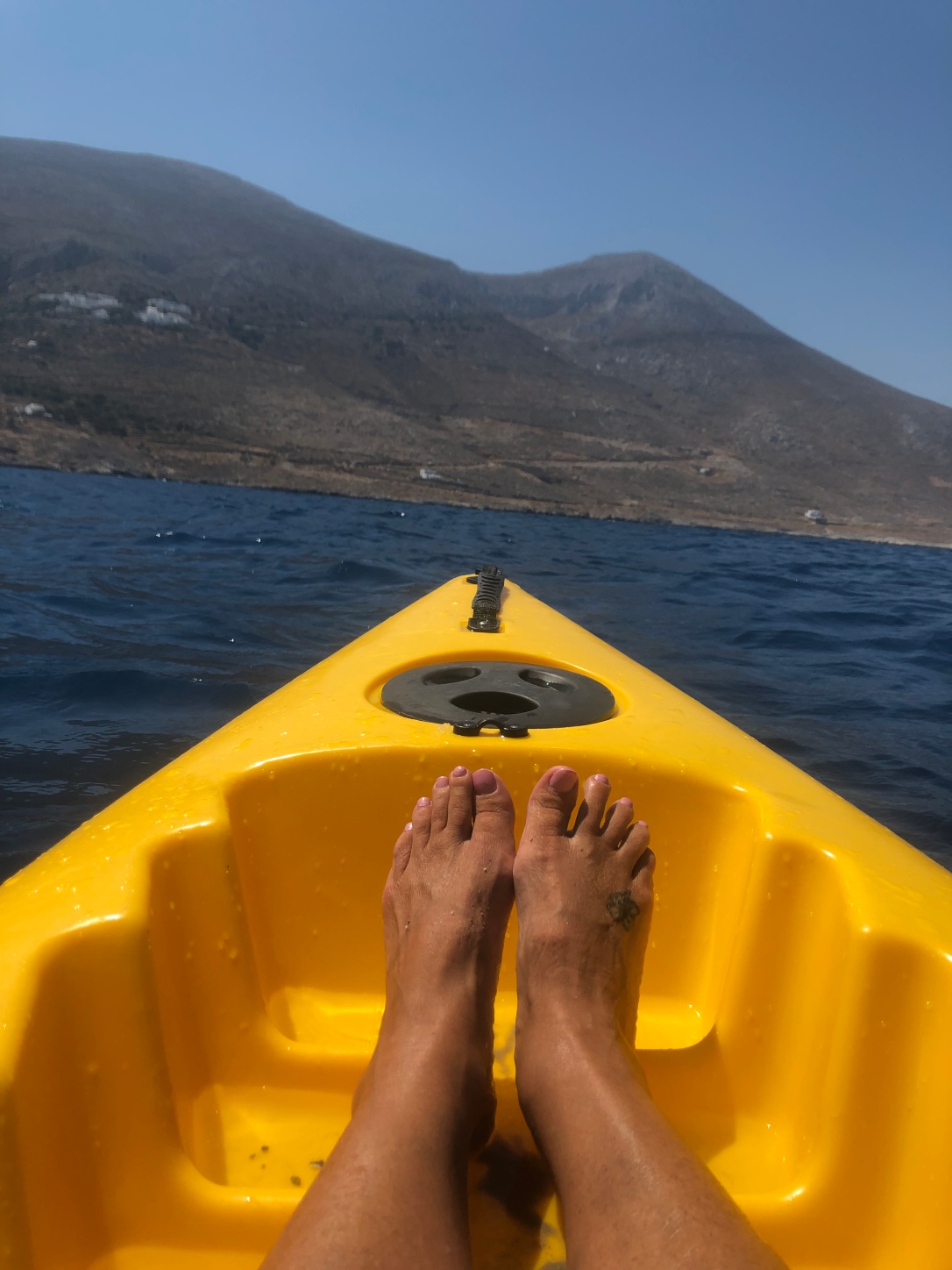 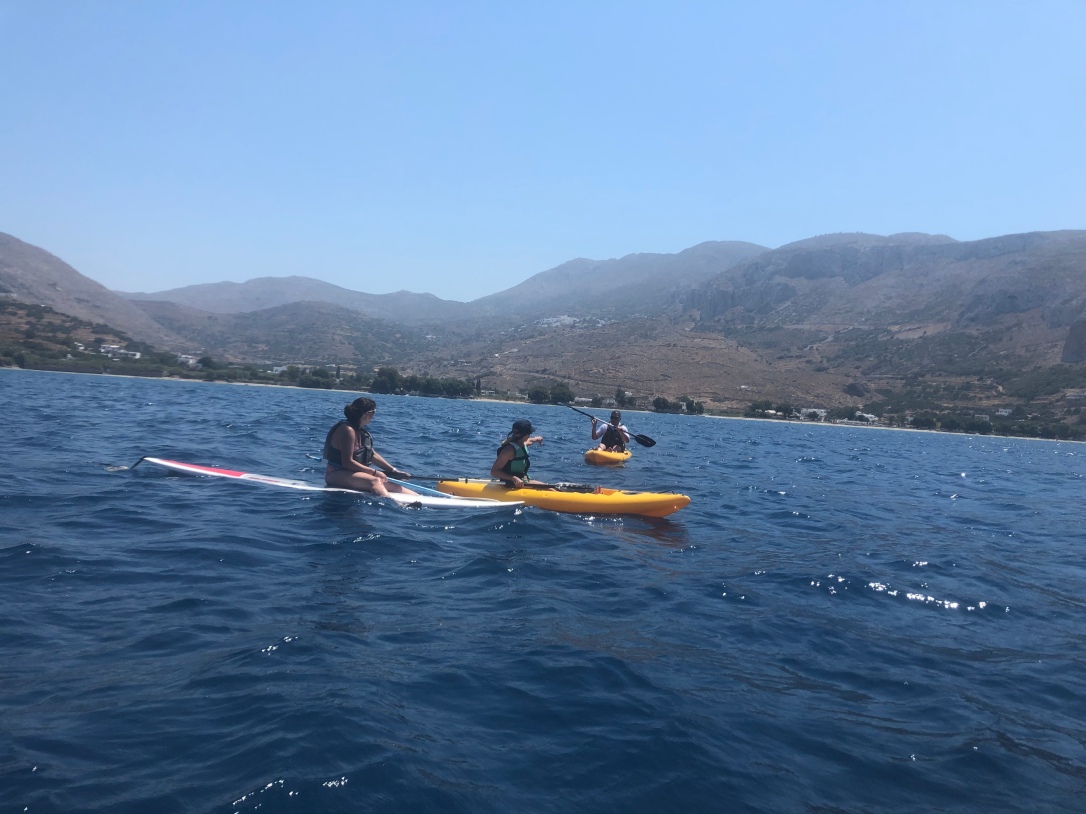 The next day most of the others took a day trip to see a couple of monasteries. The stair count scared me off so I decided to go back into town shopping while Scarlett, another of our group, went scuba diving. Unfortunately, I lost my hearing aid somewhere along the way so I didn’t get much enjoyment out of that trip fretting about where it could be. Lana returned from the trip to see me pacing the room, muttering to St. Anthony over it and just as she was about to give me a gift she picked up at the monestary, I found my hearing aid clinging to the metal on the side of my bed (it’s magnetic). Everyone needs a Lana!

That was the extent of the outside activities I took part in but the hotel had several other excursions to choose from including a cooking demonstration, hiking tours, wine tastings and donkey rides. The rest of my free time was spent around the pool relaxing and reading although very little reading got done on this trip.

Next up, the retreat. Thanks for reading!